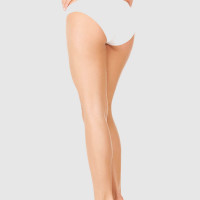 This procedure (originally called liposuction – a more limiting term) describes the process of using long hollow probes (cannulae) with opening at the end to remove fat, effectively re-contouring or “sculpting” areas proving resistant to weight loss. The objective is to restore natural body shape. Liposculpture also encompasses such techniques as fat transfer grafting to areas of fat loss commonly in the cheeks and the back of the hands.

Dr. Feiner uses the Liposculpture technique as taught to him by the legendary Parisian cosmetic surgeon Dr. Pierre Fournier. The technique requires the use of relatively narrow gauge instruments and controlled manual syringe suction, rather than continuous machine generated suction using large bore cannulae. Additionally the procedure is performed purely under the control of tumescent local anaesthetic infiltration (called Klien’s type formulae) into the area to be treated.

Liposculpture should not be viewed as an alternative to normal weight loss, the objective being one of contour shape correction of excessive fat deformities.

The technique is demanding for the surgeon but what we attempt to achieve for the patient is a pleasing natural result with normalisation of commonly resistant contour deformities in regions such as hips, outer thighs, inner thighs, abdomen, neck and many other regions.